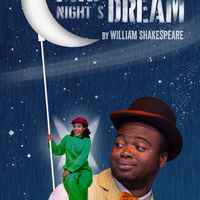 A Midsummer Night’s Dream with the National Players

Join us for a performance of A Midsummer Night’s Dream with the National Players, followed by a Q&A.

A Midsummer Night’s Dream is one of Shakespeare’s most popular comedies; a fast-paced tale which follows four young lovers, an acting troupe, and fairy royalty as they travel through a mystical wood. The lovers fall prey to a magical trickster named Puck, an attendant of the fairy king Oberon. Sent on a mischievous errand by Oberon, Puck uses the power of a mythical flower upon the lovers, and the ensuing confusion drives the comedic force of this play.

Established in 1949 and based at Olney Theatre Center since 1952, National Players is America’s longest-running touring company. Founded on the principle of prioritizing areas with limited access to theatre, National Players company consists of 10 early-career theatre artists who spend 10 months touring the United States with their three-play repertory to a variety of diverse populations and venues from performing arts centers, universities, but also public schools, rural community centers, and penitentiaries. National Players also acts as an educational ambassador, teaching theatre-related courses to students of all ages and backgrounds. Learn more at: nationalplayers.org