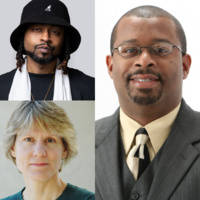 An Evening in Conversation with the Baltimore Symphony Orchestra

From May 27 – June 19, the Baltimore Symphony Orchestra will be celebrating the historic-tenure of its iconic Music Director – Marin Alsop.

As a part of the Gala Celebration on June 19th, and in commemoration of Juneteenth, The BSO is honored to present the world premiere of “Destined Words,” by Baltimore composer James Lee III in partnership with Baltimore spoken-word artist Wordsmith.

This evening's event will be a conversation between James Lee III and Wordsmith about the ground-breaking work, moderated by Judith Krummeck.

Curio Wellness is the commissioning sponsor of “Destined Words.”

Anthony Parker better known as "Wordsmith" is a Baltimore-based songwriter, performer, entrepreneur and philanthropist. Wordsmith makes hip-hop with a strong motivational message. His mission is to entertain and educate through a message of purpose while providing clean, quality, marketable Music for the Masses. Philanthropy has always been a major part of Wordsmith's core values and his partnerships with Project Plase Homeless Shelter in Baltimore and Kids Connection Haiti keeps his purpose alive and well. As of July 2020, Wordsmith officially opened his nonprofit “Rise with a Purpose, Inc.”

Judith Krummeck is the evening drive time host for Maryland’s classical music station, WBJC, and she is the author of two books. "Beyond the Baobab" is a collection of essays about her immigrant experience. Her biographical memoir, "Old New Worlds," was a finalist for the 2020 Next Generation Indie Book Awards and the National Indie Excellence Awards. She is working on her first novel, and one of her screenplays is currently in development in Cape Town.

ASL interpretation will be available for attendees