An Evening With James Magruder, Jen Michalski, and Amber Sparks 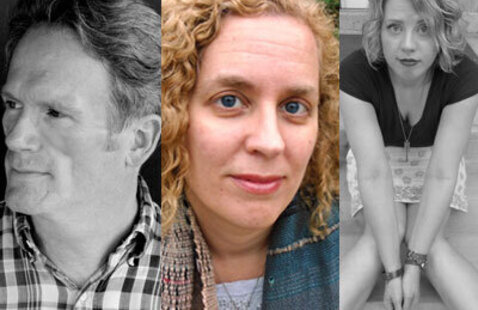 James Magruder’s fiction has appeared in The Gettysburg Review, New England Review, Subtropics, Bloom, The Normal School, Gargoyle, New Stories from the Midwest, and elsewhere. His début novel, Sugarless, was a finalist for a Lambda Literary Award and shortlisted for the 2010 William Saroyan International Writing Prize. His collection of stories, Let Me See It, was published by TriQuarterly Books/Northwestern University Press in 2014. His adaptations of works by Molière, Marivaux, Lesage, Labiche, Gozzi, Dickens, Hofmannsthal, and Giraudoux have been staged on and off-Broadway, across the country, and in Germany and Japan. He is a four-time fellow of the MacDowell Colony, and his writing has also been supported by the Kenyon Playwrights Conference and the Sewanee Writers’ Conference, where he was a Walter E. Dakin Fellow in Fiction. He teaches dramaturgy at Swarthmore College and fiction at the University of Baltimore. Visit him at www.jamesmagruder.com.

Jen Michalski is the author of the novels The Summer She Was Under Water (2016, QFP) and The Tide King (Black Lawrence Press 2013), a couplet of novellas called Could You Be With Her Now (Dzanc 2013), and two collections of fiction (From Here, 2014; and Close Encounters, 2007). Her work has appeared in more than 80 publications, including Poets & Writers. In 2013, she was named as “One of 50 Women to Watch” by The Baltimore Sun and “Best Writer” by Baltimore Magazine. She is the host of the reading series Starts Here! and editor of the journal jmww.

Amber Sparks is the author of the widely acclaimed The Unfinished World and Other Short Stories, as well as the collection May We Shed These Human Bodies, and co-author of the The Desert Places. Her fiction and non-fiction has appeared in numerous magazines and journals. She lives in Washington, DC with two beasts and two humans, and she lives online at www.ambernoellesparks.com or @ambernoelle on Twitter. She's almost certainly seen more Godzilla movies than you.