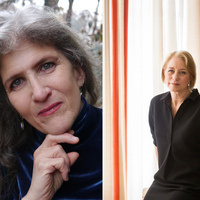 An Evening with Marion Winik and Laura Lippman

Join us for a lively evening as Marion Winik, The Baltimore Book of the Dead, and Laura Lippman, Sunburn, discuss their newest books, the unpredictable writing life, and Baltimore.

When Cheryl Strayed was asked by The Boston Globe to name a book she finds herself recommending time and again, she chose The Glen Rock Book of the Dead. Now that beloved book has a sequel: The Baltimore Book of the Dead, another collection of portraits of the dead, their compressed narratives weaving a unusual, richly populated memoir. Approaching mourning and memory with great care and an eye for the idiosyncratic, Marion Winik's The Baltimore Book of the Dead begins in the 1960s in the author’s native New Jersey, moves through Austin, Texas and rural Pennsylvania, and settles in her current home of Baltimore.

Longtime All Things Considered commentator Marion Winik is the author of First Comes Love, The Glen Rock Book of the Dead, and seven other books. Her Bohemian Rhapsody column at BaltimoreFishbowl.com has received the Best Column and Best Humorist awards from Baltimore Magazine, and her essays have been published in The New York Times Magazine, The Sun, and many other publications. She is the host of The Weekly Reader radio show and podcast on WYPR-FM. She reviews books for Newsday, People, and Kirkus Reviews and is a board member of the National Book Critics Circle. She is a professor in the MFA program at the University of Baltimore.

New York Times bestselling author Laura Lippman returns with a novel of psychological suspense about the lengths we go to outrun our pasts, and what happens when love gets in the way. A modern spin on a classic noir tale, Sunburn is an enthralling love story about two people locked in an uncompromising game of cat and mouse. But instead of rules, this game has dark secrets, forbidden desires, inevitable betrayals—and cold-blooded murder. By turns heartbreaking and breathtaking, Sunburn is about the secrets we keep—and how far we’ll go to keep them.

Laura Lippman is a New York Times bestselling novelist who has won more than 20 awards for her fiction. Since her debut in 1997, she has published 20 novels, a novella and a collection of short stories. Lit Hub recently named her one of the "essential" female crime writers of the last 100 years. She also has written for the New York Times, the Wall Street Journal, the Washington Post and T magazine.