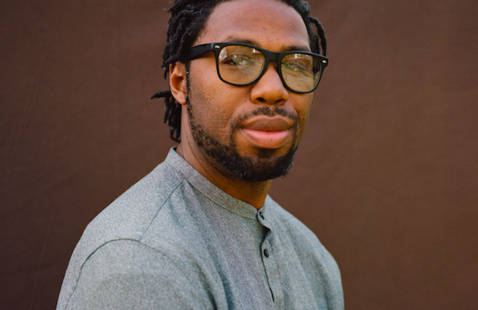 FREE tickets for Zoom Webinar or Facebook Live go on sale September 30 at 9am. Click here to register through Eventbrite.

Matthew A. Cherry will be in conversation with Sidney Clifton about his work.

Matthew A. Cherry personally raised over $280K on Kickstarter to make the award winning short film, HAIR LOVE, which was adapted into a picture book for Penguin Random House. It was released in May 2019, the book immediately became a New York Times Bestseller, and was nominated for the Goodreads Choice Award for Best Picture Book. HAIR LOVE won the Academy Award for Best Animated Short Film in 2020.

Having consulted for MonkeyPaw and executive produced Spike Lee’s highly acclaimed BLACKKKLANSMAN, he has also directed multiple episodes of television, including the Valentine’s Day episode of ABC’s “Black-ish” and “Mixed-ish”.

Additionally, Cherry's first feature film, THE LAST FALL, was inspired by his own experiences playing in the NFL and starred Lance Gross and Nicole Beharie. It debuted at SXSW and made its television premiere on BET. His second film, 9 RIDES, debuted at SXSW. He is also an accomplished music video director, having directed videos for artists including Michelle Williams, Beyoncé, Kelly Rowland, Snoop Dogg, and Common.

Send questions for Matthew A. Cherry to events@prattlibrary.org by September 30, to be answered during the live program.

Visit https://www.theivybookshop.com/ to order your copy of Hair Love.

FREE tickets for Zoom Webinar or Facebook Live go on sale September 30 at 9am. Click here to register through Eventbrite.

I loved this opportunity to hear from a young writer, director. I actually had NO IDEA that he was an NFL player and that he had won an Academy Award for Hair Love, an animated short film. I only knew him as the author of the children's book and I had enjoyed the story and illustrations and found his message to be so positive. For daughters, for our fathers who raising daughters.
So I learned so much. I also found the moderator to be excellent and wonderful in her own right!
So glad that I could have this opportunity to attend