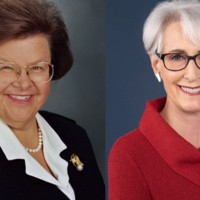 Not for the Faint of Heart: An Evening with Senator Barbara Mikulski and Wendy Sherman

FREE tickets for Zoom Webinar and Facebook Live go on sale October 29 at 9am through Eventbrite. Registration required. Click here to register: www.eventbrite.com/e/an-evening-with-senator-barbara-mikulski-and-ambassador-wendy-sherman-tickets-126994888129

The people of Maryland elected Senator Barbara A. Mikulski to be their U.S. Senator because she was a fighter – looking out for the day–to–day needs of Marylanders and the long–range needs of the nation. She was not only the Senator from Maryland, but also the Senator for Maryland.

Determined to make a difference in her community, Mikulski became a social worker in Baltimore. Her work evolved into community activism when Mikulski worked with a diverse coalition of communities across Baltimore City to successfully organize against the building of a 16–lane highway through Baltimore’s ethnic enclaves and predominantly Black-owned neighborhoods.

Mikulski’s community organizing took her to Baltimore’s City Council in 1971, the United States House of Representatives in 1976, and then the United States Senate in 1986. Retiring in 2017, Mikulski has stated that it is not how long she served that matters, but rather how well she served her state and nation.

A trailblazer, Mikulski was the first Democratic woman Senator elected in her own right. As a Senator, she focused on issues of science, technology, the economic and health security of women, as well as jobs and justice. She was awarded the Presidential Medal of Freedom by President Obama in 2015. And a supernova was named in her honor in 2012 by Nobel Prize winner Dr. Adam Reiss.

She is currently a Homewood Professor of Public Policy at John Hopkins University, where she is dedicated to preparing the next generation of change-makers and innovators.

Wendy R. Sherman is a professor of the practice of public leadership and director of the Center for Public Leadership at the Harvard Kennedy School. In addition, she is a Senior Fellow at the School’s Belfer Center for Science and International Affairs. Ambassador Sherman is Senior Counselor at Albright Stonebridge Group and former Under Secretary of State for Political Affairs. She is currently an MSNBC global affairs contributor and on the USA TODAY Board of Contributors.

This program is part of 2020 Women's Vote Centennial Initiative conversations at the Pratt Library.

Their personal experiences along with big picture answers provided great flavor to the session.

Wonderful program, the moderator let Senator Mikulski & Ambassador Sherman talk at length, and they are remarkable women with plenty of expertise & experience to share. Their tips on being a "first-y", getting help from others, and helping pave the way for people coming up behind were helpful & affirming. And I love that they spoke of their experiences as kids & how important the public library was to them. So true! What a wonderful resource we are privileged to have.