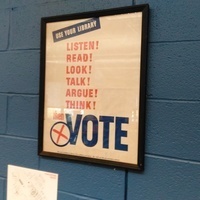 Join us for a slide-illustrated talk by Michael J. Wilson in honor of National Voter Registration Day on Tuesday, September 22.

The right to vote has been a continuing journey of expanding civic rights.  In the beginning, the only people who could vote were white male land-owners (even in Maryland you had to own at least fifty acres of land). This journey has been led by movements (women’s suffrage, civil rights, labor unions, etc.) by political parties (Democratic, Republican, and independent parties like the Communists, Socialists and Greens) and often by candidates. At times, the government itself has led efforts for enfranchising voters.

In Michael J. Wilson's collection, he has focused on the movements, parties, and government--not on candidates. The reasons why people register and vote has been as wide-ranging as anti-smoking to tenants’ rights to marriage equality. It’s about using pop art, fine art, and celebrities. The history of voting rights in United States is also the story of growing diversity, inclusion, and democratizing political power. Join us for a conversation about this history.

A member of the American Political Items Collectors, Michael J. Wilson has participated in voter registration campaigns for Planned Parenthood, the NAACP and the United Food and Commercial Workers International Union and led registration and get-out-vote campaigns in many states, including Florida, New Hampshire, and Michigan. He is a registered voter in Baltimore City.