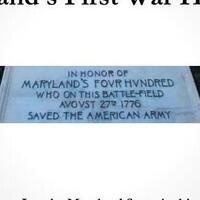 Presented in partnership with Maryland State Archives and Maryland 400.

Owen Lourie is a historian at the Maryland State Archives, where he joined the staff in 2003. He has conducted and supervised research on a wide array of topics relating to Maryland history, specializing in the Colonial, Revolutionary, and Early Federal eras, as well as the operations and members of the state's government. Since 2013, he has been the project director of Finding the Maryland 400, a collaboration with the Maryland Society of the Sons of the American Revolution, studying the soldiers who saved the Continental Army at the Battle of Brooklyn in 1776.

Owen Lourie earned a B.A. in American Studies from Kenyon College in 2005, and an M.A. in history, with a concentration in public history, from the University of Maryland, Baltimore County in 2012.

This talk chronicles the Maryland 400, the soldiers from Maryland who saved George Washington's army at the Battle of Brooklyn in August 1776. It describes their actions, including their famous last stand against the British. It also follows the lives of some to the soldiers after the war, including a number from Baltimore. For more information about the project, see msamaryland400.wordpress.com

Very interesting and educational. I really enjoyed it!

I enjoyed it and learn quite a bit that supplemented a book I was reading on Rev War Prisioners of War.

Owen Lourie's talk was excellent. His explanation of the battle and its components made the action come alive, especially with the maps and graphics. I enjoyed his stories of the soldiers who don't always make news. It was a thoughtful and intelligent lecture.
Too bad that getting into the venue was so difficult that I missed the opening statements. And the question and answer session afterward was poorly organized and presented.

The presentation was obviously well researched, but I was put off by the presenter apparently reading the entire presentation. I thought there might be more about individual soldiers--I am not personally interested in military strategy. I wish he'd used many more slides with photos. Quotes on slides are boring when the presenter reads to the audience.

I found the lecture very informative. That was a Battle that had not been covered much in history books. I am proud of my MD heritage. Capt. Benjamin Ford may have been a relative of mine which will be a very interesting item to add to my family tree. I had suggested a topic to present, which is the Battle for Baltimore and the citizen army during the War of 1812. The battle strategy to save Baltimore was to sink barges in the harbor that would be interesting. Not to mention Francis Scott Key. There is not that much out there on the War of 1812. Diana

An informative talk by Owen Lourie on this important moment in American history. Over 250 in attendance and countless more to view the recording. Thank you for hosting!

I enjoyed hearing the personal accounts of soldiers from MD who fought in this crucial battle on Long Island.

Excellent, very interesting, I learned a lot about the battle and the role of the Maryland troops. I wish there had been more about some of the participants and a little less about Baltimore city.

Awesome job by staff and the lecturer. Very knowledgeable on the topic. I like how he did not talk about topics he did not know and stated that instead of trying to give information that may not be correct. Gave us other sources to check out. Really well done.