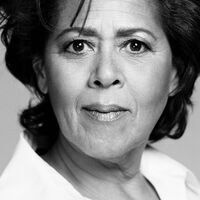 FREE tickets for Zoom Webinar or Facebook Live go on sale October 13 at 9am. Registration required. Click here to register.

Playwright, actor, and educator Anna Deavere Smith uses her singular brand of theatre to explore issues of community, character, and diversity in America. The MacArthur Foundation honored Smith with the “Genius” Fellowship for creating “a new form of theatre — a blend of theatrical art, social commentary, journalism, and intimate reverie.” Best known for crafting more than 15 one-woman shows drawn from hundreds of interviews, Smith turns these conversations into scripts and transforms herself onstage into an astonishing number of characters. In her speaking events, Smith discusses the many “complex identities of America,” and interweaves her discussions with portrayals of people she has interviewed to illustrate the diversity of emotions and points of view on controversial issues.

Currently, Smith appears on ABC’s hit series Black-ish and the ABC legal drama For the People. She is probably most recognizable as the hospital administrator on Showtime’s Nurse Jackie and the National Security Advisor on NBC’s The West Wing. Her films include The American President, Rachel Getting Married, and Philadelphia.

Send questions for Anna Deavere Smith to events@prattlibrary.org by October 26, to be answered during the live program.

She was remarkably great.

I had seen ADS many years ago here at the Walters Art Museum and was super impressed and was anxious to hear her again. The nuances of her voice and gestures are amazing. Thank you for bring her here to Charm City.
Her message of "grace" is so needed today in our polarized nation, and city.

I have wanted to see Ms. Anna Deavere Smith for years and never had the opportunity. The performance and Q&A were delightful, exciting, illuminating, and insightful. I truly appreciate Enoch Pratt free Library for facilitating it.

This program was excellent, and the theme of "Reclaiming Grace" was most appropriate. Ms. Deavere Smith's ability to channel the spirits and voices of the people she has interviewed---including Rev. Peter J. Gomes, Jessye Norman, and John Lewis---was simply amazing.

I have a bias. Anything Ms. A.D. Smith does always captivates me. Even her role on "Nurse Jackie"—absolutely loved it. Last night's was gripping, moving. Hers is not just talent but a palpable soul that communicates especially well!
Thank you for the presentation.
Matthew-Daniel Stremba
Baltimore City

The lecture was inspiring, uplifting--and those are overworked words I seldom use. The term "subime" came to me afterwards; I couldn't spend the rest of the evening, as I'd planned, on pleasant but trivial entertainment.

It was great and I hope to hear Ms. Smith again!

It's tough to engage audiences through Zoom, but WOW did Anna Deavere Smith BRING IT ! The John Lewis performance was particularly powerful/moving. Perfect program heading into the Nov. 3 election. Thank you Pratt Library and CityLit Project!

I enjoyed it very much, and the one-hour time frame was welcome--and respected.