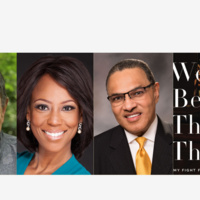 Join us for a conversation about the life and legacy of Elijah Cummings between Dr. Maya Rockeymoore Cummings, book collaborator James Dale, and moderator Dr. Freeman Hrabowski. Presented in partnership with the Reginald F. Lewis Museum.

Part memoir, part call to action, We’re Better Than This is the story of our modern-day democracy and the threats that we all must face together, as well as a retrospective on the life and career of one of our country’s most inspirational politicians. We’re Better Than This reminds people that in this country we don’t elect kings, and we cannot afford four more years of this false one.

Dr. Maya Rockeymoore Cummings is a social entrepreneur, speaker, writer, and strategist who’s on a mission to drive society toward inclusion. After a quarter of a century of working on innovative public policy and multimillion-dollar social change initiatives in the government, nonprofit, and private sectors, Maya is a policy and political expert who understands how to build and sustain cross-sector collaborations, diverse coalitions, dynamic diversity, equity, and inclusion strategies, and effective education campaigns. An accomplished public speaker and author, Maya has appeared in a variety of media outlets such as CBS, CNN, MSNBC, Fox News and BET and her writings have been published in the New York Times, The Atlantic, The Huffington Post, and the Washington Post among other publications. She has served on numerous boards including the National Association of Counties Financial Services Corporation, the National Committee to Preserve Social Security and Medicare, and the National Academy of Social Insurance. She is the recipient of multiple honors such as the Aspen Institute Henry Crown Fellowship Award and the Congressional Black Caucus Foundation Fellowship Award and has been a candidate for Maryland governor and the U.S. Congress. A former chair of the Maryland Democratic Party, Maya earned her B.A. in political science from Prairie View A&M University and her M.A. and Ph.D. in political science, with an emphasis in public policy, from Purdue University. She is the widow of the late Congressman Elijah E. Cummings and lives in West Baltimore with her dog Andy.

James Dale has been author-collaborator on a number of books on topics including business, medicine, and life lessons. His works include The Power of Nice with agent-negotiator Ron Shapiro; Just Show Up with Hall of Fame baseball player Cal Ripken Jr.; and The Q Factor with Super Bowl–winning coach Brian Billick.

Freeman A. Hrabowski, III, has served as President of UMBC (The University of Maryland, Baltimore County) since 1992. His research and publications focus on science and math education, with special emphasis on minority participation and performance. He chaired the National Academies’ committee that produced the 2011 report, Expanding Underrepresented Minority Participation: America’s Science and Technology Talent at the Crossroads. He was named in 2012 by President Obama to chair the President’s Advisory Commission on Educational Excellence for African Americans. His 2013 TED talk highlights the “Four Pillars of College Success in Science.”  A child-leader in the Civil Rights Movement, Hrabowski was prominently featured in Spike Lee’s 1997 documentary, Four Little Girls, on the racially motivated bombing in 1963 of Birmingham’s Sixteenth Street Baptist Church. Born in 1950 in Birmingham, Alabama, Hrabowski graduated from Hampton Institute with highest honors in mathematics. He received his M.A. (mathematics) and Ph.D. (higher education administration/statistics) from the University of Illinois at Urbana-Champaign.

Order your copy of We're Better Than This from the Ivy Bookshop.

This program was unbelievably good. I read the book shortly after publication. Dr. Cummings, Mr. Dale and Dr. Hrabowski's conversation was the icing on the cake. I would give it my highest rating.👍👍👍👍👍👍👍👍👍👍