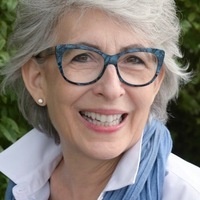 Ceiling Breakers and History Makers: A Legacy of Jewish Women and Justice

The Enoch Pratt Free Library is pleased to present Ceiling Breakers and History Makers: A Legacy of Jewish Women and Justice with the Baltimore Festival of Jewish Literature.

In celebration and honor of Women’s History month and the International Women’s Day and inspired by the legacy of Justice Ruth Bader Ginsburg, join authors, Elaine Weiss, Marlene Trestman, and Debbie Levy for a virtual conversation about women who made their passion, profession, and purpose to seek justice and repair the world.

Books provided in partnership with the Ivy Bookshop. Thank you for supporting local small business!

Debbie Levy is the award-winning and New York Times best-selling author of more than twenty-five books for young people. Her most recent releases include Becoming RBG: Ruth Bader Ginsburg’s Journey to Justice (graphic novel-style biography); This Promise of Change: One Girl’s Story in the Fight for School Equality; and a new edition of her 2010 book, The Year of Goodbyes: A True Story of Friendship, Family, and Farewells. Other books include I Dissent: Ruth Bader Ginsburg Makes Her Mark and We Shall Overcome: The Story of a Song. Debbie lives in Maryland with her husband. They have two grown sons. Visit her online at www.debbielevybooks.com.

Elaine Weiss is a Baltimore-based journalist and author, whose feature writing has been recognized with prizes from the Society of Professional Journalists, and her byline has appeared in many national publications, as well as in reports for National Public Radio. Her long-form writing garnered a Pushcart Prize "Editor's Choice" award, and she is a proud MacDowell Colony Fellow.

Marlene Trestman is the author of Fair Labor Lawyer: The Remarkable Life of New Deal Attorney and Supreme Court Advocate Bessie Margolin, and is now writing Most Fortunate Unfortunates: New Orleans’s Jewish Orphans’ Home, 1855-1946 for LSU Press. Both books draw on Trestman’s personal experiences. Orphaned at age 11, Trestman grew up as a client of the Jewish Children’s Regional Service, the agency that formerly ran the orphanage in which Margolin was raised. Spending time together while Trestman attended Goucher College and GW law school, and started her legal career, Margolin inspired her future biographer.

For her writing, Trestman has received the Supreme Court Historical Society’s Hughes-Gossett award and funding from the National Endowment for the Humanities, Hadassah-Brandeis Institute, and American Jewish Archives. For more information, visit www.marlenetrestman.com.