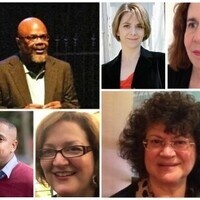 Le Hinton is the author of five poetry collections including The Language of Moisture and Light (Iris G. Press, 2014). His work has been widely published and can be found or is forthcoming in The Best American Poetry 2014, Little Patuxent Review, The Baltimore Review, The Summerset Review, Pittsburgh Poetry Review, and outside Clipper Magazine Stadium in Lancaster, Pennsylvania, incorporated into Derek Parker's sculpture Common Thread. His current manuscript, A Chorus of Cotton, is scheduled to be published later in 2016 or early 2017.

Laura Shovan is former editor for Little Patuxent Review and editor of two poetry anthologies. Her chapbook, Mountain, Log, Salt and Stone, won the inaugural Harriss Poetry Prize. Laura works with children as a poet-in-the-schools and was the 2015-2016 Howard County Poetry and Literary Society's writer in residence. The Last Fifth Grade of Emerson Elementary is her debut novel-in-verse for children (Wendy Lamb Books/Random House).

Contest winner Saundra Rose Maley has had poems in Dryad, Beltway Poetry Quarterly, Full Moon on K Street: Poems about Washington D.C., and D.C. Perspectives. Her first book of poems, Disappearing Act, was published in 2015, by Dryad Press. She co-edited A Wild Perfection: The Selected Letters of James Wright with Anne Wright and is currently working again with Anne on a book about Wright and translation, tentatively titled Where the Treasure Lies. She also published Solitary Apprenticeship: James Wright and German Poetry. She teaches Composition and Research at Montgomery College in Takoma Park, Maryland.

Runner-up Maggie Rosen lives in Silver Spring, Maryland. She grew up in Greensboro, North Carolina. She has degrees from Brown University and The George Washington University. Most of her professional work has been as a teacher of English to speakers of other languages. Her poems have been published in Cider Press Review, RiverLit, Beltway Poetry Quarterly, Barely South, and Conclave, among other publications. She was recently a finalist in the Bethesda Urban Partnership Poetry Contest and in the Montgomery Writes! Contest. Her chapbook, The Deliberate Speed of Ghosts, will be published in 2016 by Red Bird Chapbooks.

Runner-up Sheri Allen is a recent Baltimore returnee after decades in other states and countries. Former Visiting Assistant Professor of English at Miami University of Ohio, she worked for the Theology Department at Loyola University Maryland this spring. Sheri earned her MFA in Creative Writing with a multi-genre thesis from the University of Florida, and a PhD in English and Comparative Literature with a Creative Writing track from the University of Cincinnati. Her poems have appeared in Lilith, Best New Poets, Tampa Review, Birmingham Poetry Review, and Boulevard.