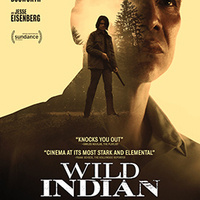 As teens on a Wisconsin reservation in the '80s, indigenous cousins Makwa and Teddo agreed to cover up a tragic homicide. Today, Makwa, or preferably "Michael," is an assimilated but inwardly raging executive, Teddo is a tormented ex--con ... and the ghosts of their shared past have them on a fateful collision course.  This powerful, award-winning drama about Native American identity and generational trauma marks “a new stepping stone in Native film making” with its Indigenous actors & director.