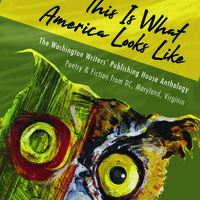 Creative State of Our Union: Readings and Discussion

Join us for readings and discussion inspired by the Washington Writers' Publishing House's new anthology, This Is What America Looks Like: Poetry and Fiction from DC, Maryland, and Virginia, 111 works by 100 writers. Editor Kathleen Wheaton describes this anthology as "a picture of our time, our shared losses, our shared life."

The event will feature a panel of writers representing the anthology.

Poet Sarah Browning’s books are Killing Summer and Whiskey in the Garden of Eden. She co-founded and for 10 years directed Split This Rock. Her fellowships include ones from the Lillian E. Smith Center, the DC Commission on the Arts and Humanities, Yaddo, Mesa Refuge, the Virginia Center for the Creative Arts, and the Adirondack Center for Writing.

Hayes Davis is the author of Let Our Eyes Linger (Poetry Mutual Press, 2016). His work appears in many journals and anthologies. He was a member of Cave Canem’s first cohort of fellows. A high-school English teacher, he lives in Silver Spring with his wife, poet Teri Ellen Cross Davis.

Caron Garcia Martinez is a writer, teacher, and former diplomat who grew up in Los Angeles. A graduate of Williams College, the London School of Economics and Political Science (MS, Psychology), and George Mason University (MFA), Caron has taught at American University since 2008. Caron's published work is in short fiction and essays, and her current writing project is a novel set in Mexico in 1910, built on family stories recalled by her abuela, Celia.

Adam Schwartz’s debut collection of stories, The Rest of the World, won the Washington Writers' Publishing House 2020 prize for fiction. His stories have won prizes sponsored by Poets & Writers, Philadelphia Stories, and Baltimore City Paper and appeared in numerous literary journals. He has stories forthcoming in Raritan and Gargoyle. He has an MFA from Washington University in St. Louis. For 23 years, he has taught high school in Baltimore.

Panel moderator Kathleen Wheaton grew up in California, studied at Stanford University, and worked for 20 years as a journalist in Spain, Argentina, Brazil, Mexico, and Bethesda, Maryland. Her fiction has appeared in many journals and three anthologies, and she is a five-time recipient of Maryland State Arts Council grants. Her collection, Aliens and Other Stories, won the 2013 Washington Writers' Publishing House Fiction Prize. Since 2014, she has served as president and managing editor of the Washington Writers’ Publishing House.

Learn more about This Is What America Looks Like.

Email fic@prattlibrary.org with questions about this event.