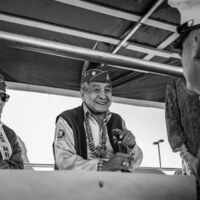 In World War I & World War II, Native Americans used Navajo and other tribal languages to send secret messages to battlefields around the world. They became known as Code Talkers.

In the same spirit, we have written a series of messages for you to decode using another tribal language. Are you up to the challenge?