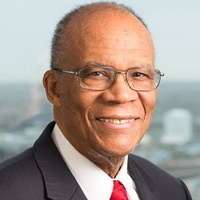 Larry S. Gibson grew up in Baltimore, MD and attended Howard University, where he was the student government president. In 1967, he earned his law degree from Columbia University.  In 1972, he began teaching at the University of Virginia Law School. Two years later, he transferred to the University of Maryland School of Law, where he still teaches. Professor Gibson has researched several exhibits, articles, and newspaper series about black lawyers and civil rights. His book Young Thurgood: The Making of a Supreme Court Justice won a 2013 International Book Award. Under President Carter, Gibson served as Associate Deputy Attorney General. Later this year, he will publish his second book about Thurgood Marshall. He is a member of Kappa Alpha Psi, a Sovereign Grand Inspector General 33° of the Prince Hall Masons, and an Archon of Sigma Pi Phi.

Writers LIVE! programs are supported in part by a bequest from The Miss Hubbard Adult Programming Fund.