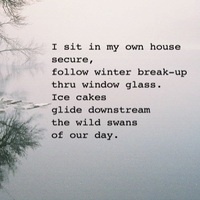 Join us for a film screening of Immortal Cupboard: In Search of Lorine Niedecker an artistic interpretation, tribute and film essay on Lorine Niedecker’s life and poetry.  Filmmaker and artist Cathy Cook will be in attendance and there will be a brief  Q & A after the film.

Living for years in the solitude of rural Wisconsin, Niedecker (1903-1970), chose what many might see as a lonely path. But out of her very deliberate and austere lifestyle came a poetics of observation so acute that some literary critics have described her as the 20th century’s Emily Dickinson.

Taking cues from Niedecker’s work and the Wisconsin heritage they share, experimental filmmaker Cathy Cook combines original live-action footage, animation, archival images and the poet’s only audio interview to unfurl the poet’s psychological and physical landscape. Through a repetition of images, text and sounds that mirror Niedeckers own processes and forms, Cook gives new voice and visibility to the extraordinary works of this very private poet. Niedeckers ruminations on nature, ecology, gender, domesticity, work, family and social politics find new life in the sensitive cinematic interpretations of fellow artist, Cathy Cook, whose own critical and original aesthetics constitute a broad and refreshing challenge to the conventions of both documentary film and the cine-biography. Niedecker and Cook meet up on a path not taken and IMMORTAL CUPBOARD is Cook’s report back from way down that path.

As an artist, filmmaker, educator and eco-activist, Cathy Cook has been creating films, animation, poetry films, collages and installations since the early 1980’s.  She has exhibited her award-winning work internationally in both solo and group shows including MOMA, The Whitney Museum, PBS and numerous other venues. In 2001, Cook was awarded a Guggenheim Memorial Fellowship.  Nature, topical social issues, and poetry have been staples in her creative work. Cook’s Cranes in Motion project, took her to the largest migration locations for Sandhill Cranes and Whooping Cranes. Currently Cook is an Associate Professor in Visual Arts – Cinematic Arts at UMBC. Cook migrates between Baltimore and Wisconsin; where she lives on a small swampy lake with her dog Zippy. They share residence with cranes, loons, eagles, badgers, deer, herons and coyotes.