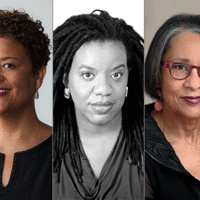 Three women writers discuss the intersection of place, time, and culture in literature and in the lives of women. The conversation will be moderated by Linda A. Duggins, Hachette Book Group.

Following the death of her husband, artist and chef Ficre Ghebreyesus, poet Elizabeth Alexander found herself at an existential crossroads. Her new memoir, The Light of the World, describes a very personal and yet universal quest for meaning, understanding, and acceptance. Elizabeth Alexander composed and read "Praise Song for the Day" at President Barack Obama's 2009 inauguration. The author of six books of poetry, she is the inaugural Frederick Iseman Professor of Poetry at Yale University and was recently elected a Chancellor of the Academy of American Poets.

LaShonda Katrice Barnett is the author of a story collection and editor of I Got Thunder: Black Women Songwriters On Their Craft and Off the Record: Conversations with African American & Brazilian Women Musicians. She has taught literature and history at Columbia University, Sarah Lawrence College, Hunter College, and Brown University. Her debut novel, JAM! On the Vine, tells the story of Ivoe Williams who founds the first female-run African American newspaper in Kansas City in the early 20th century. She risks her freedom and her life to report on the atrocities of segregation in the American prison system.

Lalita Tademy is the author of the bestselling novels, Cane River and Red River. Set agains the backdrop of Alabama in 1822, her new novel, Citizens Creek, follows the lives of "Cow Tom," a young slave boy who is sold to work on a plantation for a Creek Indian Chief, and his beloved granddaughter, Rose, whom he nicknamed Little Warrior. Through Cow Tom and Rose, Tademy shows the strength and determination of not allowing negative circumstances or influences to stand in the way of success.

Reception and book signing immediately following in the 2nd floor corridor. The Ivy Bookshop will have copies of the authors' books for sale.