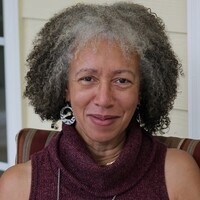 Join award-winning mother and son duo Carole and Jeffery Boston Weatherford for a Juneteenth Jamboree! Following a reading of Carole's book Juneteenth Jamboree and a talk about their ancestors, listen to interactive spoken word by Jeffery and learn how to make a corn husk doll. Instructions on how to make a corn husk doll will be provided so participants can make one at home.

Presented in partnership with the Reginald F. Lewis Museum.

Hailed by Huffington Post as "a master of picture book non-fiction," Carole Boston Weatherford has authored more than 50 books, including three Caldecott Honor winners: Freedom in Congo Square, Voice of Freedom: Fannie Lou Hamer: Spirit of the Civil Rights Movement, and Moses: When Harriet Tubman Led Her People to Freedom and the Coretta Scott King Honor book Becoming Billie Holiday. Her poetry, nonfiction, historical fiction and biographies focus on heritage, culture and social justice. Her latest release is Be a King: Dr. Martin Luther King, Jr.'s Dream and You. Carole is a professor at Fayetteville State University in North Carolina.

An artist and spoken word poet, Jeffery Boston Weatherford is the illustrator of the award-winning book You Can Fly: The Tuskegee Airmen. The acclaimed middle grades/YA verse novel was named a best book of the year by National Council for the Social Studies, Association for Library Service to Children, National Council of Teachers of English, New York Public Library and Kirkus Reviews. He has designed, illustrated and published several children's books: Africa, A Bat Cave: An Abecedarian Bedtime Chronicle, and Princeville: The 500-Year Flood. He has presented in the U.S. and Africa and has exhibited in numerous galleries. He often collaborates with author Carole Boston Weatherford.