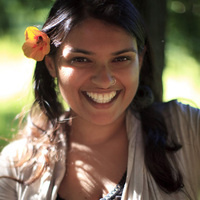 Join author and illustrator Nidhi Chanani as she shares about her middle grade graphic novel Jukebox and what goes into making graphic novels and comics.

The program will include time for a short Q&A with Nidhi. Please email your questions to events@prattlibrary.org in advance to be considered.

Born in Calcutta and raised in suburban southern California, Nidhi creates because it makes her happy – with the hope that it can make others happy, too.

Her debut graphic novel, Pashmina (First Second/Macmillan), released in fall 2017. It received starred reviews in the School Library Journal, Publisher’s Weekly, and was reviewed in the New York Times. Pashmina was a Junior Library Guild selection, Chicago Public Library Best Book of 2017, Texas Maverick Graphic Novel 2017, Northern California Indie Bookseller Association Long-List Title and a YALSA Top Ten Great Graphic Novels for Teens. In March of 2019, the film adaptation of Pashmina with Netflix was announced. Gurinder Chadha (Bend it like Beckham, Blinded by the Light) is set to direct.

Her second original graphic novel, Jukebox, released in June 2021 with a starred review in Booklist and glowing reviews in Kirkus and Publishers Weekly.

She is currently working on unannounced picture books and graphic novels.  She is an instructor in the Master of Fine Arts, Comics program at the California College of Arts.