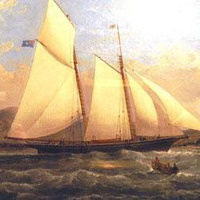 Lunch and Learn: Reversing the Sail: Black Maryland in Africa

Maryland has a long and historic relationship with West Africa. Maryland society, its landscape, its peoples, and its institutions, were all deeply shaped by generations of West Africans brought to these shores beginning in the seventeenth century. Less well known is that thousands of Black Marylanders also returned to West Africa in the nineteenth century and left an important imprint on the other side of the Atlantic.

Professor Herbert Brewer of Morgan State University will discuss this process of ‘reversing the sail,’ and the historical significance of the diaspora of Black Marylanders in West Africa during the nineteenth century. A few questions to ponder: Who left? Which parts of Maryland did they come from? Why did they leave? What happened when they got to West Africa? What is their legacy? What is the relevance of this particular piece of history to the various debates we are having in the United States today about race and history?

Professor Herbert Brewer is an intellectual and cultural historian of eighteenth and nineteenth century African American life and culture. His research has focused on the African American Diaspora in the Atlantic World. His scholarship has appeared in a variety of publications and he is a co-author of the Guide to the History of Slavery in Maryland. Professor Brewer lives in Washington DC with his wife and their son.

Buy Tickets
This event content is powered by the Localist Community Event Platform.