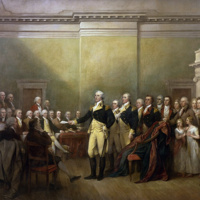 Lunch and Learn: Washington Resigns - How George Washington's Career led to Annapolis in 1783

On December 23, 1783, General George Washington stepped into the Senate Chamber in a brand new Maryland Statehouse and resigned his military commission before an almost powerless US Congress. As the eight year war for American independence ended, General Washington was the recognized leader of the new United States. His resignation, recognizing that the civilian government had jurisdiction over its military forces, created international shock waves that still reverberate today. Public historian Burt Kummerow will highlight the background of the December resignation, its implications for the future of the new United States and George Washington's background that led from his hot-blooded and ambitious youth to that extraordinary moment in 1783 Annapolis.

Beginning his history career studying Rome and Greece and especially Pompeii, Burt Kummerow went on to early America. He helped found the Living History Movement in the United States and has been a writer and popular speaker, public television producer (Maryland Public Television) and director of three important Maryland museums; Historic St. Mary’s City, the National Museum of Civil War Medicine (Founding Director) and the Maryland Historical Society(now the Maryland Center for History and Culture). As the President of Historyworks, Inc. in Maryland, he has been a multi-faceted public historian who brings history to the general public.  He is the author and co-author of five books and many articles; War for Empire, Heartland, Pennsylvania’s Forbes Trail, and In Full Glory Reflected, Discovering the War of 1812 in the Chesapeake. With Mary Blair, he has written and produced BGE 200 Years, Moving Smart Energy Forward, A History, 1816-2016, a book for the 200th anniversary of the Baltimore Gas and Electric Company. In 2018, he became the founding director of the Maryland’s Four Centuries Project, (Maryland400), laying the groundwork for a successful celebration of Maryland’s 400th Anniversary in 2034.

The presentation will also be broadcast on the Enoch Pratt Free Library Facebook page. It can be watched after the broadcast on Facebook Live. Click here for the Live video library.