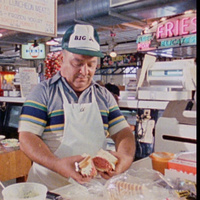 Maryland on Film VI: Look Before You Leap Year Edition

Join us on February 29 as Enoch Pratt Free Library/State Library Resource Center partners with the Maryland Historical Society to host "Maryand On Film VI" a glimpse back at the people and places of Maryland's past, showcasing what "things used to look like" from as far back as the 1920s up through the '90s.

"Maryland On Film" will present a number of historically significant short films and commercials from the Pratt and Maryland Historical Society collections, including their collaborative restoration of the 1939 Lowell Thomas-narrated travelogue, Baltimore: Modern City of Charm and Distinction.

Pratt Library is proud to premier two 16mm films - Angela Mays' Stick Him (1978) and Robert Cole's Market (1980) - that were recently preserved by a federally-funded grant from the National Film Preservation Foundation (NFPF) and digitized by Colorlab, in Rockville, Md., to ensure that this footage will be available to future generations. Stick Him profiles legendary Baltimore boxing trainer Mac Lewis, while Market documents a busy day in 1980 at South Baltimore's Cross Street Market.

The Maryland Historical Society started its "Maryland On Film" series in 2012, and in this sixth edition will present the Baltimore City Life Museum-produced socio-economic study Blueprint for Tomorrow (1996), Bayshore Roundup (1928), Druid Hill Park Zoo (1927) and rare footage of the first international flight from Baltimore to Bermuda in Pan American Balt-Bermuda (1937).

There will be time for a brief discussion after the films.