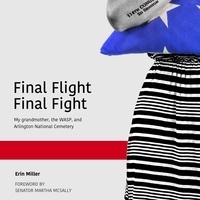 Elaine Danforth Harmon flew as a pilot with the Women Airforce Service Pilots (WASP) of World War II. Despite being part of the first group of women to fly for the United States Army, the WASP remained officially unrecognized as members of the military due to discriminatory thinking about gender on Capitol Hill and beyond.

It was not until after her grandmother died that Erin Miller fully understood why she had spent so many years talking about her service with the WASP. Her grandmother's last request was to be laid to rest at Arlington National Cemetery. Erin Miller led her family's campaign on behalf of her grandmother, and all the women of the WASP, across social media, traditional news outlets, and to Capitol Hill to fight for their equal recognition at one of the nation's most well-known cemeteries. Final Flight Final Fight: My Grandmother, the Wasp, and Arlington National Cemetery is Erin Miller’s story to gain recognition for the trailblazing pilots.

Copies of the book will be available for purchase and signing after the event.