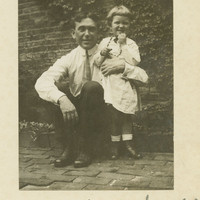 Honoring the Memory, Career, and Bequest of Henry Louis Mencken.

Photo caption: Mencken and his niece Virginia in the backyard at 1524 Hollins St. Mencken was 39, at the cusp of his greatest decade. During the 1920s, the New York Times suggested that he was the most powerful private citizen in America.

Presented by Will Englund, a Pulitzer Prize-winning journalist and former foreign correspondent in Moscow for both the Baltimore Sun and the Washington Post. He is author of the highly acclaimed March 1917: On the Brink of War and Revolution, which explores events in Russian and the United States in the crucial Weeks before American entry into World War I. H.L. Mencken figures prominently in this story.