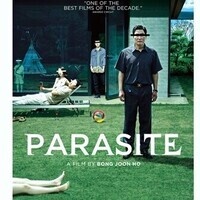 Parasite made history when it became the first non-English film to win the Academy Award for Best Picture; it also won Oscars for Best Director, Best International Feature and Best Original Screenplay.

Parasite is a pitch-black modern fairytale about the ever-increasing gap between the rich and the poor, as exemplified by two families. The well-to-do Parks seem to have it all, while the struggling Kims are rich in street smarts but not much else. But when these two houses are brought together, the Kims sense a golden opportunity. Soon, a symbiotic relationship forms between the two families. But this new ecosystem is fragile, and soon enough greed and class prejudice threaten to upend the Kims’ newfound comfort. Korean language with English subtitles.