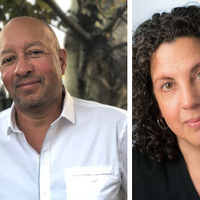 Registration encouraged, but not required. Click here to register through Eventbrite.

Carl Phillips reads from his poetry and discusses it with Lia Purpura.

Carl Phillips is the author of 15 books of poetry, most recently Pale Colors in a Tall Field (FSG, 2020). His other books include Wild Is the Wind (FSG, 2018), winner of a Los Angeles Times Book Prize. Publishers Weekly, in a starred review, called it “haunting and contemplative as the torch song for which the collection is named.” His selected poems, Quiver of Arrows: Selected Poems 1986-2006, was published by FSG in 2007. Other books include The Tether (FSG, 2002), winner of the Kingsley Tufts Poetry Award, Double Shadow (FSG, 2012), winner of the Los Angeles Times Book Prize, and Silverchest (FSG, 2014), a finalist for the Griffin Prize. He recently published a chapbook, Star Map with Action Figures (Sibling Rivalry Press, 2019). A four-time finalist for the National Book Award, and a finalist for the National Book Critics Circle Award, his other honors include the Lambda Literary Award, an Award in Literature from the American Academy of Arts and Letters, the Theodore Roethke Memorial Foundation Poetry Award, the Thom Gunn Award for Gay Male Poetry, and fellowships from the Guggenheim Foundation, the Library of Congress, and the Academy of American Poets, for which he served as Chancellor from 2006-2012.

Lia Purpura is the author of nine collections of essays, poems, and translations. A finalist for the National Book Critics Circle Award, her awards include Guggenheim, NEA, and Fulbright Fellowships, as well as four Pushcart Prizes, the Associated Writing Programs Award in Nonfiction, and others.  Her work appears in The New Yorker, The New Republic, Orion, The Paris Review, The Georgia Review, Agni, and elsewhere. She lives in Baltimore, MD, where she is Writer in Residence at The University of Maryland, Baltimore County.

Purchase copies of the authors' books at www.theivybookshop.com.

Please email poetry@prattlibrary.org with questions about this event.