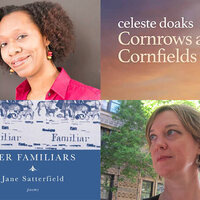 Poet and journalist celeste doaks is the author of Cornrows and Cornfields (Wrecking Ball Press, UK, March 2015). Cornrows was listed as one of the “Ten Best Books of 2015” by Beltway Quarterly Poetry. Her poem “For the Chef at Helios…” received a 2015 Pushcart Prize nomination. Her multiple accolades include a Lucille Clifton Scholarship to attend Squaw Valley Writers Workshop, the 2010 AWP WC&C Scholarship, and residencies at Atlantic Center of the Arts and the Fine Arts Work Center in Provincetown. Her journalism has appeared in the Huffington Post, Village Voice, Time Out New York, and QBR (Quarterly Black Book Review). Most recent poems can be found in Rabbit Ears: TV Poems an Anthology. Celeste received her MFA from North Carolina State University; she currently teaches creative writing at Morgan State University.

Jane Satterfield is the recipient of awards in poetry from the National Endowment for the Arts, Maryland Arts Council, Bellingham Review, Ledbury Poetry Festival, Mslexia, and more. Her essays have received awards from the Pirate’s Alley Faulkner Society, Massachusetts Review, Florida Review, and the Heekin Foundation, among others. Her books of poetry are Her Familiars, Assignation at Vanishing Point, and Shepherdess with an Automatic. She is also the author of Daughters of Empire:  A Memoir of a Year in Britain and Beyond (Demeter Press). Born in England, she teaches creative writing at Loyola University Maryland.