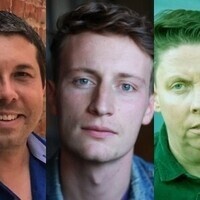 Jona Colson’s first poetry collection, Said Through Glass, won the Jean Feldman Poetry Prize from the Washington Writers’ Publishing House. He received his BA in English and Spanish from Goucher College, a Master of Arts in Linguistics from George Mason University, and a Master of Fine Arts degree from American University. His poems have appeared in Ploughshares, The Southern Review, The Massachusetts Review, and elsewhere. His translations and interviews can be found in Prairie Schooner, Tupelo Quarterly, and The Writer’s Chronicle. He is an associate professor of ESL at Montgomery College in Maryland and lives in Washington, D.C.

Edgar Kunz is the author of the poetry collection Tap Out (Houghton Mifflin Harcourt, 2019), a New York Times New & Noteworthy book. His work has been supported by fellowships and awards from the National Endowment for the Arts, the Academy of American Poets, the MacDowell Colony, Vanderbilt University, and Stanford University, where he was a Wallace Stegner Fellow. He lives in Baltimore, Maryland, where he teaches at Goucher College and in the Newport MFA at Salve Regina University.

Tanya Olson lives in Silver Spring, Maryland, and is a Lecturer in English at UMBC (University of Maryland, Baltimore County). Her first book, Boyishly, was published by YesYes Books in 2013 and received a 2014 American Book Award. Her second book, Stay, was released by YesYes Books in 2019. In 2010, she won a Discovery/Boston Review prize, and she was named a 2011 Lambda Fellow by the Lambda Literary Foundation. Her poem "54 Prince" was chosen for inclusion in Best American Poems 2015 by Sherman Alexie.

Read "When a Bee Is Caught" by Jona Colson.
Read "Farmsitting" by Edgar Kunz.
Read "54 Prince" by Tanya Olson.