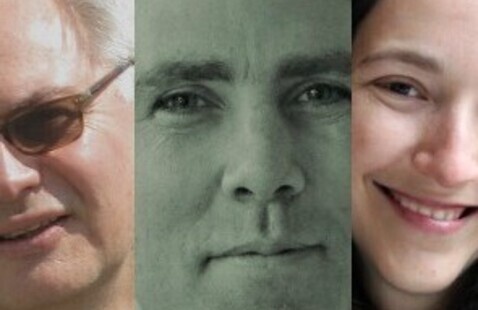 Ned Balbo is the author of The Trials of Edgar Poe and Other Poems, awarded the Poets’ Prize and the Donald Justice Prize. His fifth book, 3 Nights of the Perseids, was selected by Erica Dawson for the Richard Wilbur Award. A co-winner of the Willis Barnstone Translation Prize, he is the recipient of a National Endowment for the Arts translation fellowship. Balbo was recently a visiting faculty member in Iowa State University’s MFA program in creative writing and environment. He lives in Baltimore with his wife, poet-essayist Jane Satterfield. Learn more at https://nedbalbo.com.

G.H. Mosson is the author of Family Snapshot as a Poem in Time (Finishing Line Press, 2019), as well as three prior books of poetry, Heart X-rays (PM Press, 2018, with Marcus Colasurdo), Questions of Fire (Plain  View, 2009), and Season of Flowers and Dust (Goose River, 2007). His poetry and literary criticism have appeared in Measure, Tampa Review, The Cincinnati Review, Smartish Pace, and Loch Raven Review, among other journals, and his poetry has been nominated four times for the Pushcart Prize. He also edited the anthology Poems Against War: Bending Towards Justice (Wasteland Press, 2010).  He holds an MA in writing from the Johns Hopkins Writing Seminars, and a BA in English. Mr. Mosson is a father, writer, lawyer, and dreamer. He practices employee rights and disability rights law as well as general civil litigation.  He hails from NYC and lives in his second home-state of Maryland.

Nomi Stone is a poet and an anthropologist, and the author of two poetry collections, Stranger’s Notebook (TriQuarterly, 2008) and Kill Class (Tupelo, 2019). Winner of a Pushcart Prize, Stone’s poems appear recently in Poetry, American Poetry Review, The New Republic, Bettering American Poetry, The Best American Poetry, Tin House, New England Review, and elsewhere. Her anthropological articles recently appear in Cultural Anthropology and American Ethnologist, and her ethnographic monographic, Pinelandia: Human Technology and American Empire, is currently a finalist for the University of California Press Atelier series for Ethnographic Inquiry in the Twenty-First Century. Kill Class is based on two years of fieldwork she conducted within war trainings in mock Middle Eastern villages erected by the US military across America. Stone has a PhD in anthropology from Columbia, an MPhil in Middle Eastern Studies from Oxford, and an MFA in Poetry from Warren Wilson College and teaches at Princeton University.