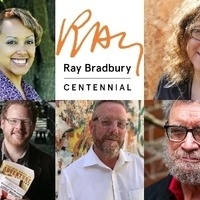 Ray Bradbury and the Future of Speculative Fiction

Happy 100th birthday, Ray Bradbury! Bring your own dandelion wine to this virtual celebration. Justina Ireland, Michael Swanwick, Sam Weller, and David Wright will share readings of Bradbury and join in a discussion of his legacy moderated by Sarah Pinsker.

Justina Ireland lives with her husband, kid, cats, and dog in Maryland. She is the author of both full-length books and short fiction and considers words to be her best friends. She has written a number of books, including Star Wars books for children. You can find her books Vengeance Bound and Promise of Shadows, as well as the New York Times best seller Dread Nation and its sequel Deathless Divide, wherever books are sold.  You can visit her at her website: justinaireland.com.

Sarah Pinsker’s fiction has won the Nebula, Sturgeon, and Philip K. Dick Awards, and her 50-plus published stories include finalists for the Hugo, World Fantasy, and other awards. Her first collection, Sooner or Later Everything Falls Into the Sea (Small Beer Press), and her first novel, Song For A New Day (Berkley), were published in 2019. She is also a singer/songwriter with three albums and another forthcoming.

Michael Swanwick is one of the most acclaimed and prolific science fiction and fantasy writers of his generation. He is the recipient of the Nebula, Theodore Sturgeon, and World Fantasy Awards as well as five Hugo Awards. His most recent novel, The Iron Dragon's Mother, completes a trilogy begun 25 years before with The Iron Dragon's Daughter. He lives in Philadelphia with his wife, Marianne Porter. Photo credit: Mikey Mongol.

Sam Weller is the two-time Bram Stoker Award-winning biographer of Ray Bradbury. He worked with the legendary author for 12 years on four books and a graphic novel. Weller's The Bradbury Chronicles: The Life of Ray Bradbury was a national best seller. Weller's latest book, Dark Black, a collection of new American Gothic short fiction, is available now. Weller is a professor in the English and Creative Writing Department at Columbia College Chicago. You can follow him on twitter @Sam__Weller.

David Wright is a librarian with the Reader Services department at The Seattle Public Library, working out of the big downtown branch, where for over 15 years he has presented—and now podcasts—the library's Thrilling Tales: A Storytime for Grownups. Ray Bradbury is among his very favorite writers, and he has enjoyed sharing his tales in senior centers, shelters, bookstores, bars, and libraries. He will be presenting two segments of Fahrenheit 451 for the Bradbury Center's Centennial Read-A-Thon, which begins streaming on August 22nd.