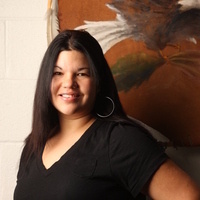 Popular narratives of the Great Migration, remembered as a mass movement of southern African Americans to northern cities, do not generally include the multitude of southern American Indians who migrated north as well. Following WWII, thousands of Lumbee Indians moved from rural North Carolina to Baltimore City, seeking employment and a better quality of life. They formed a large satellite community on the east side of town, referred to as “the reservation” in its heyday. Today, only two active American Indian community-owned sites remain in the area, where there were once more than thirty. Many of the sites have been erased beyond recognition. Entire city blocks have disappeared as this area has been continually redeveloped. Knowledge of these historic sites and their significance to Baltimore’s Lumbee people exists now primarily in the memories of the elders and in the archives.

Through ethnography and archival research, and in collaboration with the elders, Ashley Minner is mapping the historic Lumbee community and developing a walking tour. Her study asks: What is the relationship between identity and place? How has the identity of the Baltimore Lumbee community been shaped by the place our people have inhabited for the past 70+ years? How has the presence of our people shaped the place? What will it mean if we no longer inhabit the place?