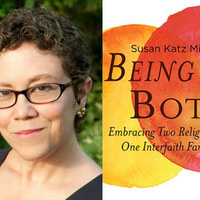 Susan Katz Miller, Being Both: Embracing Two Religions in One Interfaith Family

Susan Katz Miller grew up with a Jewish father and a Christian mother and was raised Jewish. Now in an interfaith marriage herself, she is one of the growing number of Americans who are electing to raise children with both faiths, rather than one or none.

Susan Katz Miller is a former Newsweek reporter and former US correspondent for New Scientist. She blogs on interfaith families for Huffington Post and OnBeingBoth.com.