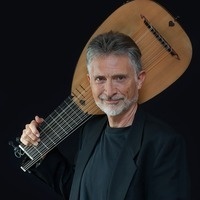 GRAMMY-nominated lutenist Ronn McFarlane performs traditional Celtic music from Scotland and Ireland combined with original, Celtic-inspired compositions.  McFarlane strives to bring the lute – the most popular instrument of the Renaissance – into today’s musical mainstream, making it accessible to a wider audience in an exciting reinvention of this historic instrument.

“Ronn McFarlane has the strength of heart, knows the beat of the Celtic soul, both past and present.” – ConcertoNet.com