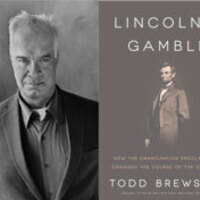 Todd Brewster, Lincoln's Gamble: The Tumultous Six Months that Gave America the Emancipation Proclamation and Changed the Course of the Civil War

On July 12, 1862, Abraham Lincoln spoke for the first time of his intention to free the slaves; on January 1, 1863, he signed the Emancipation Proclamation. These six months were perhaps the most tumultuous of Lincoln's presidency during which he fought with his generals, disappointed his cabinet, and sank into painful bouts of depression. In Lincoln's Gamble, Todd Brewster provides an authoritative and riveting account of this critical period as Lincoln searches for the right moment to enact his proclamation and turn the tide of the war.

Todd Brewster has served as Don E. Ackerman Director of Oral History at the U.S. Military Academy, West Point, He worked as an editor for Time and Life and as senior producer for ABC News. He is the coauthor with the late Peter Jennings of the bestselling books The Century and In Search of America.