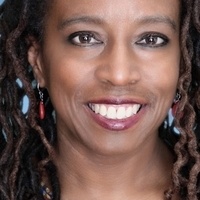 In honor of Women's History Month, the Rhonda Robinson Trio will perform compositions by female jazz musicians such as Abbey Lincoln, Carmen McRae, Mary Lou Williams and others.

Singer and Flutist, Rhonda Robinson gives educational concerts, workshops and artist residencies in area schools. Since 2010, she has been the Vocal Jazz instructor at Contemporary Arts, Inc.'s SAX Music and Dance summer camp at Loyola University. She is a charter member of the Baltimore Jazz Alliance and performs with their "Jazz for Kids" Quintet. Rhonda also sings with the Peabody-Hopkins Chorus, which appeared in 2012 at New York's prestigious Carnegie Hall and with JOYOUS VOICES a cappella holiday carolers. From 2010-2017, she was the featured vocalist for Holy Comforter Lutheran Church's JAZZ VESPERS services in Baltimore. In 2013, she became Director of their Jazz Ministry.
Pianist Justin Taylor is a Towson University graduate with a degree in Jazz Studies and Commercial Music, has been performing for over 24 years on both local and national stages with some of the music industry's most prolific artists in jazz, gospel and R&B. Justin is also a writer, producer, and engineer. He has performed with or opened for artists such as Grammy nominated R&B & Hip Hop artist Jaheim, Contemporary R&B and Pop singer K'Jon, Baltimore's very own national recording artist Maysa Leak as well as Tim Warfield, Warren Wolf, Corinthia Cromwell, Ed Hrybyk and other regional and national artists.
Philadelphia native and bassist Blake Meister has worked with a range of virtuoso musicians, including Larry Willis, Gary Thomas, Louis Hayes, Ralph Peterson, Katherine McPhee, and Ahn Sook Sun, among others. His debut album, Septagon (Inner Circle Music), was named album of the year, and he has won several Maryland Individual Artist Awards, and been a finalist in international competitions. As an educator, he spent a decade teaching at the Peabody Conservatory, while serving as founding director of the jazz program in the Peabody Preparatory.