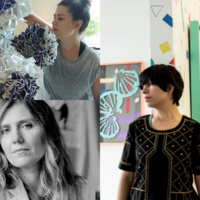 Alex Ebstein is an artist and curator based in Baltimore, MD.  She received her MFA from Towson University in 2015, and her BA in Studio Art from Goucher College in 2007.  Recent solo exhibitions include Victori + Mo gallery in Brooklyn, NY, Cuevas Tilleard in New York, NY, Frutta Gallery in Rome, Italy and Kent Place Gallery in Kent, NJ. Her work has received write-ups in the New York Times, FastCo, Self Magazine, BmoreArt, Baltimore Beat, City Paper, Beautiful Decay and ArtFCity.  In addition to her studio career, Ebstein is the founder and director of three galleries in Baltimore between 2009 and present, Nudashank, Phoebe and Resort.  Ebstein is newly the Director of Exhibitions and Curator at Goucher College.

Zemer Peled’s work examines the beauty and brutality of the natural world. Her sculptural language is formed by her surrounding landscapes and nature, engaging with themes of nature and memories, identity and place. Her works are formed of thousands of porcelain shards constructed into large-scale/small-scale sculptures and installations. Peled was born and raised in Israel. She earned her MA at the Royal College of Art. In recent years, her work has been exhibited internationally at venues including Sotheby & and Saatchi Gallery, Nelson Atkins Museum of Art among others. She has been featured in Vogue, O Magazine, Elle and other international publications.

Cara Ober writes about Baltimore's unique cultural landscape from the perspective of an artist, feminist, and culture worker. She approaches the art community from a constructive and critical perspective informed by material and pop culture, history, social movements, and politics. As the founding editor of BmoreArt, Baltimore's daily online art magazine and biannual print journal, Ober has written critical reviews, essays, interviews, and opinion editorials for the past decade about contemporary art, museum culture, and the innovative ways artists sustain a professional creative practice. Ober has taught and lectured at MICA, Johns Hopkins University, American University, UMBC, Towson University, and Goucher College. She holds an MFA in painting from MICA and a degree in fine arts from American University.

BmoreArt is Baltimore's art and culture magazine, based both in print and online. We are a community-based, independent art publication that reflects the culture of Baltimore and the surrounding Mid-Atlantic region, including Maryland, Washington, DC, and Northern Virginia. We provide creative and critical coverage of Baltimore’s cultural landscape and work with a diverse team of local writers, editors, and artists. In addition to our online and print publications, we engage through social media and a events, including biannual magazine launch events and speaker series.

We believe that Baltimore’s culture producers and creative makers deserve to be discussed, critiqued, and informed. BmoreArt covers the arts of the region on a daily basis and presents it to an engaged audience that is both local and global. Our mission is to build awareness, equity, and community through critical dialogue about art and culture.

The program is part of the Festival of Jewish Literature. Click here to see the full festival schedule.