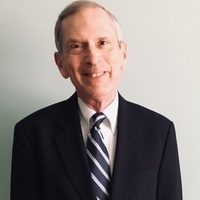 Tom Linthicum will be in conversation with Ian S. Markham about his book.

Tom Linthicum is a freelance writer who spent nearly 35 years as an award-winning reporter and editor at The Baltimore Sun and The Daily Record. He knew Mark Dyer for 10 years and was asked by the bishop to be his biographer. The book, A Man Called Mark: The Biography of Bishop Mark Dyer, was published in 2018 and was a finalist for the award of excellence from the Religion News Association.  Tom and his wife, Dorothy, also a writer, now live in Alexandria, Virginia.

The Very Rev. Ian S. Markham, Ph.D., was appointed as Dean and President of Virginia Theological Seminary (VTS) in August 2007. He completed his Ph.D. at University of Exeter in the United Kingdom where he focused on Christian Ethics. He previously earned an M.Litt. in Philosophy and Ethics from the University of Cambridge and a B.D. in Theology from the University of London.

Before being called to VTS, he served as Dean and Professor of Theology and Ethics at Hartford Seminary in Connecticut and Visiting Professor of Globalization, Ethics, and Islam at Leeds Metropolitan University in the United Kingdom.

Order your copy of A Man Called Mark: The Biography of Bishop Mark Dyer from the Ivy Bookshop.