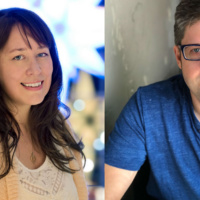 Join us for a conversation and tour with Diane Zinna, The All-Night Sun, and Jamie Poissant, Lake Life.

David James Poissant is the author of the novel Lake Life, a New York Times Editors' Choice selection, Publishers Weekly Summer Read, and a Millions Most Anticipated Book of 2020. His story collection The Heaven of Animals was a winner of the GLCA New Writers Award and a Florida Book Award, a finalist for the L.A. Times Book Prize, and was longlisted for the PEN/Robert W. Bingham Prize. His stories and essays have appeared in The Atlantic Monthly, The Chicago Tribune, The New York Times, One Story, Ploughshares, The Southern Review, and in numerous textbooks and anthologies including New Stories from the South, Best New American Voices, and Best American Experimental Writing. His books are currently in print in six languages. He teaches in the MFA Program in Creative Writing at the University of Central Florida and lives in Orlando with his wife and daughters.

Diane Zinna is originally from Long Island, New York. She received her MFA from the University of Florida and went on to teach creative writing for ten years. She was formerly the executive co-director at AWP, the Association of Writers & Writing Programs, which hosts the largest literary conference in North America each year. In 2014, Diane created the Writer to Writer Mentorship Program, helping to match more than six hundred writers over twelve seasons. The All-Night Sun, her first novel, was recently longlisted for The Center for Fiction’s First Novel Prize. Diane lives in Fairfax, Virginia, with her husband and daughter.

Visit https://www.theivybookshop.com/ to order your copy of The All-Night Sun and Lake Life.