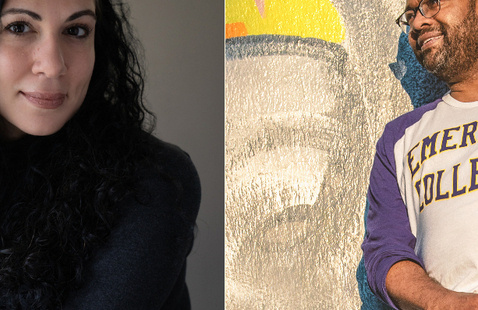 Join us for a conversation and short tour with Jabari Asim, facilitated by Susan Muaddi Darraj. Presented in partnership with the Ivy Bookshop.

In Stop and Frisk, Jabari Asim ruthlessly interrogates entrenched injustice and its insidious echoes. Part rap sheet, part concept album, Asim lays down tracks that add conviction to our collective broken record: What could be more American than pretending truths were self-evident when they seldom were? Drawing defiant inspiration from the news and the Blues, these poems arrest our attention and burn grooves into us. These starkly revelatory poems expose the dark heart of our nation and call for a reckoning-the only way out before everything breaks / into hurt, noise, and ever after.

Jabari Asim is the acclaimed author of "A Taste Of Honey" and "Only The Strong," both works of fiction, as well as the highly praised "The N Word: Who Can Say It, Who Shouldn't, And Why." His children's books include "Whose Toes Are Those," "Whose Knees Are These," "Fifty Cents And A Dream," and "Preaching To The Chickens." He is the former editor-in-chief of Crisis magazine, a preeminent journal of politics, ideas and culture published by the NAACP and founded by W.E.B. Du Bois in 1910. He is an associate professor of creative writing at Emerson College.

Susan Muaddi Darraj won an American Book Award for her novel-in-stories, A Curious Land. It also earned the 2016 Arab American Book Award,  won the AWP Grace Paley Prize, and was shortlisted for a Palestine Book Award. Her previous short story collection, The Inheritance of Exile, was published in 2007 by University of Notre Dame Press. In 2018, she was named a 2018 Ford Fellow by USA Artists. Her debut children’s chapter book series, Farah Rocks, is the first to feature a Palestinian American protagonist -- the smart, brave, and funny Farah Hajjar. The first book in the series, Farah Rocks Fifth Grade, was published in January 2020, and the second, Farahs Rocks Summer Break, will be published in August 2020. Follow her on Instagram/Twitter @SusanDarraj.