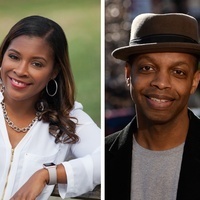 Sadeqa Johnson will be in conversation with Robert Jones, Jr. about her book, Yellow Wife: A Novel.

Sadeqa Johnson is the award-winning author of four novels. Her accolades include the National Book Club Award, the Phillis Wheatley Book Award, and the USA Best Book Award for Best Fiction. She is a Kimbilio Fellow, former board member of the James River Writers, and a Tall Poppy Writer. Originally from Philadelphia, she currently lives near Richmond, Virginia, with her husband and three children. To learn more, visit SadeqaJohnson.net.

Robert Jones, Jr. is a writer from New York City. He received his B.F.A. in creative writing, and M.F.A. in fiction from Brooklyn College. He has written for numerous publications, including The New York Times, Essence, and The Paris Review. He is the creator and curator of the social-justice, social-media community Son of Baldwin, which has over 275,000 members across platforms. The Prophets is his debut novel.

Order your copy of Yellow Wife: A Novel from the Ivy Bookshop.