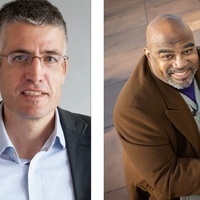 Registration not required, but encouraged. Click here to register through Eventbrite. Presented in partnership with the Baltimore Museum of Industry.

Alec MacGillis will be in conversation with Jesse J. Holland about his new book, Fulfillment: Winning and Losing in One-Click America .

Alec MacGillis is a senior reporter at ProPublica. MacGillis previously reported for The New Republic, The Washington Post, and the Baltimore Sun. He won the 2016 Robin Toner Prize for Excellence in Political Reporting, the 2017 Polk Award for National Reporting, and the 2017 Elijah Parish Lovejoy Award. His work has appeared in the New Yorker, Atlantic, New York, Harper's, and New York Times Magazine, among other publications. A resident of Baltimore, MacGillis is the author of The Cynic, a 2014 biography of Sen. Mitch McConnell, and the forthcoming Fulfillment: Winning and Losing in One-Click America.

Jesse J. Holland is an award-winning writer, journalist and television personality. Jesse is host of the Saturday edition of C-SPAN’s Washington Journal, can be seen weekly as a political analyst on the Black News Channel’s DC Live and occasionally on CNN, MSNBC, Fox News and other news outlets for news and analysis.

He is the author and editor of the new Black Panther: Tales of Wakanda prose anthology released in February 2021 from Titan Books and Marvel, the first prose anthology featuring the first mainstream black superhero. He is also author of The Black Panther: Who Is The Black Panther? prose novel, which was nominated for an NAACP Image Award in 2019 and The Invisibles: The Untold Story of African American Slavery Inside The White House, which was named as the 2017 silver medal award winner in U.S. History in the Independent Publisher Book Awards and one of the top history books of 2016 by Smithsonian.com. Jesse also wrote Star Wars: The Force Awakens - Finn’s Story young adult novel and Black Men Built The Capitol: Discovering African American History In and Around Washington, D.C.

Order your copy of Fulfillment: Winning and Losing in One-Click America from the Ivy Bookshop.