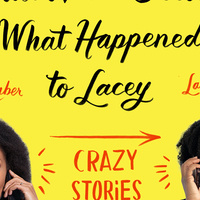 Registration required. Register through Eventbrite starting January 4 at 9am. Click here to register.

Join us for a conversation with Amber Ruffin and Lacey Lamar about their book, You'll Never Believe What Happened to Lacey. Moderated by Mykel Hunter of WEAA.

In You'll Never Believe What Happened to Lacey, writer and performer on Late Night with Seth Meyers Amber Ruffin writes with her sister Lacey hilarious anecdotes full of absurd detail about everyday experiences of racism.

Amber Ruffin is a writer and cast member on NBC's Late Night with Seth Meyers. She amazingly became the first Black woman in American history to write for a late-night talk when she joined the staff in 2014, and was a writer-sometimes performer on HBO's Black Lady Sketch Show. She has just launched her own late night show, The Amber Ruffin Show, which will anchor the new NBC streaming service, Peacock.

Lacey Lamar is Amber Ruffin's big sister. She has worked in the healthcare and human service field for more than twenty-five years, thirteen of those working with troubled youth in her community. She volunteers her time and resources to marginalized people in any way she can. Lacey lives in Nebraska with her unbelievably incredible daughter, Imani, and their 130-pound Great Dane Izzy.

I love these gifted sisters. They are able to share real stories with humor without minimizing the hard truths within.