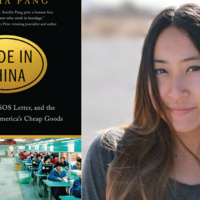 Presented in partnership with the Baltimore Museum of Industry.

Amelia Pang will be in conversation with Alec MacGillis about her new book, Made in China: A Prisoner, an SOS Letter, and the Hidden Cost of America’s Cheap Goods.

In 2012, an Oregon mother named Julie Keith opened up a package of Halloween decorations. The cheap foam headstones had been five dollars at Kmart, too good a deal to pass up. But when she opened the box, something shocking fell out: an SOS letter, handwritten in broken English. The note’s author, Sun Yi, was a mild-mannered Chinese engineer turned political prisoner, forced into grueling labor for campaigning for the freedom to join a forbidden meditation movement. He was imprisoned alongside petty criminals, civil rights activists, and tens of thousands of others the Chinese government had decided to “reeducate,” carving foam gravestones and stitching clothing for more than fifteen hours a day.

In Made in China, investigative journalist Amelia Pang pulls back the curtain on Sun’s story and the stories of others like him, including the persecuted Uyghur minority group whose abuse and exploitation is rapidly gathering steam. What she reveals is a closely guarded network of laogai—forced labor camps—that power the rapid pace of American consumerism. Through extensive interviews and firsthand reportage, Pang shows us the true cost of America’s cheap goods and shares what is ultimately a call to action—urging us to ask more questions and demand more answers from the companies we patronize.

Amelia Pang is an award-winning journalist who has written for publications such as Mother Jones and the New Republic. She has covered topics ranging from organic import fraud to the prevalence of sexual violence on Native American reservations. In 2017, the Los Angeles Press Club awarded her first place in investigative journalism for her undercover reporting on the exploitation of smuggled immigrants who are recruited to work in Chinese restaurants. Amelia grew up in a Mandarin-speaking household in Maryland, and holds a BA in literary studies from the New School. She lives near Washington, DC, with her husband, an organic farmer. This is her first book.

Alec MacGillis is a senior reporter at ProPublica. MacGillis previously reported for The New Republic, The Washington Post, and the Baltimore Sun. He won the 2016 Robin Toner Prize for Excellence in Political Reporting, the 2017 Polk Award for National Reporting, and the 2017 Elijah Parish Lovejoy Award. His work has appeared in the New Yorker, Atlantic, New York, Harper's, and New York Times Magazine, among other publications. A resident of Baltimore, MacGillis is the author of The Cynic, a 2014 biography of Sen. Mitch McConnell, and the forthcoming Fulfillment: Winning and Losing in One-Click America.

Visit https://www.theivybookshop.com/ to order your copy of Made in China, and to pre-order Fulfillment: Winning and Losing in One-Click America.

First, let me thank you for making so much available to the public!! This event brought my attention to Made in China and I am telling everyone about it!! An amazing book which is making me evaluate every purchase!!
The only weakness in the event was the interviewer. He didn’t bring out the best in her and soooo many questions that I would have liked to ask of this brave young woman!