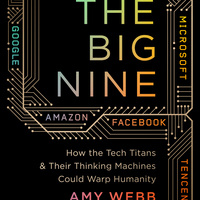 In The Big Nine: How the Tech Titans and Their Thinking Machines Could Warp Humanity, Amy Webb reveals the pervasive, invisible ways in which the foundations of artificial intelligence–the people working on the system, their motivations, the technology itself–is broken. Within our lifetimes, AI will, by design, begin to behave unpredictably, thinking and acting in ways which defy human logic. The big nine corporations may be inadvertently building and enabling vast arrays of intelligent systems that don’t share our motivations, desires, or hopes for the future of humanity.

Much more than a passionate, human-centered call-to-arms, this book delivers a strategy for changing course, and provides a path for liberating us from algorithmic decision-makers and powerful corporations.

Amy Webb is the author of The Signals Are Talking: Why Today’s Fringe Is Tomorrow’s Mainstream, professor of strategic foresight at the NYU Stern School of Business and founder of the Future Today Institute.

Amy Webb will be in conversation with Christopher Mims, a technology columnist at The Wall Street Journal.

Church of the Redeemer 5603 Charles Street