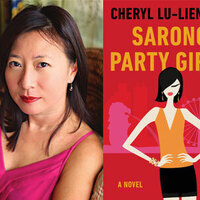 An Emma set in modern Asia, Cheryl Tan guides the reader through a young woman’s rise in the glitzy, moneyed city of Singapore, where old traditions clash with heady modern materialism.

Vividly told in Singlish—colorful Singaporean English with its distinctive cadence and slang—Sarong Party Girls brilliantly captures the unique voice of a young, striving woman caught between worlds. As Jazzy fervently pursues her quest to find a white husband, the bombastic yet tenderly vulnerable gold-digger reveals the contentious gender politics and class tensions thrumming beneath the shiny exterior of Singapore’s glamorous nightclubs and busy streets, its grubby wet markets and seedy hawker centers. Moving through her colorful, stratified world, she realizes she cannot ignore the troubling incongruity of new money and old-world attitudes which threaten to crush her dreams. With remarkable vibrancy and empathy, Tan brings not only Jazzy, but her city of Singapore, to dazzling, dizzying life.

Cheryl Tan is a New York-based journalist and author of A Tiger in the Kitchen: A Memoir of Food & Family. She is the editor of the fiction anthology Singapore Noir. She was a staff writer at the Wall Street Journal, In Style magazine and the Baltimore Sun. Her stories have also appeared in the New York Times, the Washington Post, Bon Appetit, Food & Wine, and others.

Cheryl Tan will be in conversation with Rafael Alvarez.

Rafael Alvarez is the author of ten books - both fiction and non-fiction - and a screenwriter. He wrote for the first three seasons of the HBO drama The Wire and recently finished a feature script about Nazis in occupied Greece. His most recent book is an anthology of Baltimore essays and memoir titled, Crabtown, USA.