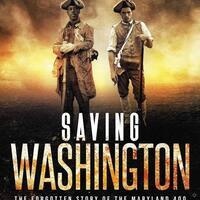 Writers LIVE: Chris Formant, Saving Washington: The Forgotten Story of the Maryland 400 and The Battle of Brooklyn

Saving Washington: The Forgotten Story of the Maryland 400 and The Battle of Brooklyn  blends real-life historical figures and events with richly developed fictional characters. On a marshy Brooklyn battlefield on August 27, 1776, four hundred men from Baltimore, Maryland assembled to do battle against a vastly superior British army. The novel follows young Joshua Bolton and his childhood friend Ben Wright, a freed black man, as they witness British tyranny firsthand, become enraptured by the cause, and ultimately enlist to defend their new nation in a battle that galvanized the American nation on the eve of its birth.

Chris Formant is a student of history and former president of a multi-billion-dollar global business. This is his second novel.