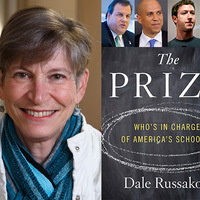 Writers LIVE: Dale Russakoff, The Prize: Who's in Charge of America's Schools?

When Mark Zuckerberg announced his $100 million pledge to transform the Newark Schools -- and to solve the education crisis in every city in America -- it looked like a huge win for then-mayor Cory Booker and governor Chris Christie. But their plans soon ran into a constituency not so easily moved: Newark's key education players, fiercely protective of their billion-dollar-per-annum system. It's a prize that, for generations, has enriched seemingly everyone, except Newark's students.

Journalist Dale Russakoff delivers a story of high ideals and hubris, good intentions and greed, celebrity and street smarts, as reformers face off against entrenched unions, skeptical parents and bewildered students. The growth of charters forces the hand of Newark's school superintendent Cami Anderson who closes, consolidates, or redesigns more than a third of the city's schools.

The Prize is a portrait of a titanic struggle over the future of education for the poorest kids, and a cautionary tale for those who care about the shape of America's schools.

Dale Russakoff spent 28 years as a reporter for the Washington Post, covering politics, education, social policy and other topics.