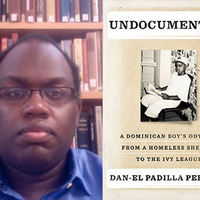 Born in the Dominican Republic, Peralta came to the United States legally with his family when he was four years old. When their visas lapsed, his father returned to the Dominican Republic. Peralta and his family went into the city's shelter system where he met a young volunteer who noticed his sharp mind and interest in his studies and helped him obtain a scholarship to Manhattan's elite Collegiate School.

Presented in partnership with Loyola University's Center for Innovation in Urban Education and the Espranza Center, with funding from the National Endowment for the Humanities and the American Library Association.