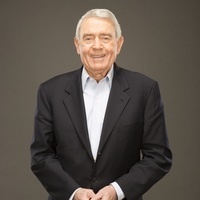 Writers LIVE! Dan Rather, What Unites Us

With more than 60 years spent chronicling our world and nation, few can match the authority, experience, and perspective that Dan Rather brings to almost any subject. From politics, the media, current events, and our country’s most pressing issues— to inspiring words of wisdom on leadership, education, social justice, civic involvement and the importance of philanthropy, Dan Rather speaks from the heart. Rather’s best-selling book of original essays, What Unites Us: Reflections on Patriotism takes on the toxic political atmosphere and polarized opinions of our times with a hopeful reminder of the core ideals that all Americans share.

Currently president and CEO of News and Guts, an independent multimedia production company, Rather remains an integral part of our national conversation. In January of 2018, he premiered The News with Dan Rather on the Young Turks Network. The weekly show focuses on original reporting and stories that Rather feels are not receiving the attention they deserve in mainstream media.

The Ivy Bookshop will have copies of the book for sale. There will be no public book signing.

An amazing night hearing Dan Rather speak on many thought provoking topics that many of us take for granted in life.